The five pre-release Condors that have been waiting release in San Simeon are finally flying free! Read the news headlines HERE. Held up by fires over the summer, the five birds were eager to stretch their wings and start exploring their new home. The cohort is made up of four females  (Condors 678,726,747, and 760) and one male ( Condor 758). All the birds are doing well and enjoying their newfound freedom. To find out more about each bird, you can read their bios on mycondor.org

First-time parenting trio Condors 204, 470, and 534 have successfully fledged their first chick! The chick ( Condor 842) is now taking short flights in its natal canyon in Big Sur, and biologists hope to see it flying along the coast with its parents soon. Because the trio used a redwood nest that was unsafe for biologists to climb, Condor 842 is untagged for the time being. After the chick learns to fly and makes it the VWS release site, VWS Biologists will capture the chick to determine gender and give it a radio transmitter so it can be tracked. Good job Condors 204, 460, and 534 and welcome to the flock Condor 842!!!


Unfortunately, we have some sad news to report. Chick 838 died last week from injuries inflicted by a natural predator and has been sent off to USFWS Pathology Lab to confirm the cause of death.  Condor 838 was the chick of Condor pair 351 and 418 and recently fledged from the cavity of a redwood tree. The incident took place away from the nest while the parents were out foraging. The first weeks of life away from the nest are the most challenging for a young condor and predators are a very real threat. 838 will be missed.

On an up note, 2016 is shaping up to be another great year for the flock, we still have three wild-born chicks (Condor 842 on the coast, Condor 828 at Pinnacles, and 835 just inland) surviving in the wild in central California and overall mortality for the wild population has been low this year.  We are anxiously awaiting the 2017 nest season to begin and hope to see our first wild eggs laid as early as February! Stay tuned...
Posted by Ventana Wildlife Society at Friday, December 09, 2016 No comments:

This spring in Big Sur we have two active condor nests on the coast and two inland. Both coastal chicks hatched at the end of April, and both are in the tops of ancient, burned redwood trees.

The first to hatch on the coast was chick number 842. This chick was born to a trio of birds – Female 534, managed by Pinnacles National Park, and males 204 “Amigo”, and 470 “Fuego”. Only time - and a blood test - will tell which bird is the father. All three birds share incubating and chick rearing duties – with three parents we hope this chick will thrive! 842’s redwood home is nestled in a grove high above the Big Sur coast, and the inside of the nest is not visible. However, based on the attentive behavior of the parents, we suspect that this chick is doing well.


Our other 2016 nestling is number 838, born to parents 351 and 418, both birds released by Pinnacles National Park that have relocated and lived in Big Sur for years. This nest, luckily, is one we can peak into using a scope. It’s a steep, brushy hike, but from the right vantage point we can see little 838 flapping his wings, playing with sticks, and begging for food from his parents.

The two inland nestlings, 828 and 835, are also progressing well. Both hatched in caves in early April in Pinnacles National Park (828) and the other in the Ventana Wilderness (835).   The parents of both nestlings are considered 'veterans' and have nested before. Nestling 828's parents are male 340 and female 236 "Tiny" and 835's parents are male 219 "Puff Daddy" and female 310.

We anticipate these four nestlings to start fledging as early as October 2016, so stay tuned for more updates! Until then, tune in to the Condor Cam and try to spot wild condors at our release site.
Posted by Ventana Wildlife Society at Wednesday, July 13, 2016 No comments:

Princess (#799) and the other 2015 wild fledged birds (#773, 787, & 789)  continue to thrive in Big Sur.  They are "regulars" on the condor cam and were spotted more recently exploring the Big Sur coastline.
Currently, untagged condors 787 and 789 are only discernible by subtle differences in feather growth patterns and their true identities won't be known until we obtain a blood sample for DNA analyses.  Obtaining DNA will require trapping them, which we hope happens in the next couple weeks...fingers crossed. Once the DNA confirms their identity we will attach a colored ID number tag and transmitter.
Do we really have to tag them? For now, yes, it's especially important that we know what happens to wild-raised condors, they represent the future of the flock. Until next time...

Posted by Ventana Wildlife Society at Wednesday, May 04, 2016 No comments:

Last week, VWS Biologists were excited to be able to confirm the existence of a second untagged juvenile! This chick is believed to be Condor #789, the offspring of Condors #199 and #438. Biologists were at the Big Sur Condor Sanctuary watching Condor #787 (a confirmed tagless juvenile, aka “Sky”) perched next to one of her moms when another untagged bird flew past!
The next day Condor #199, who we suspect to be the new chick’s father, pushed all the other birds off of a calf carcass on the release slope and stood guard, giving his chick a chance to feed uninterrupted. 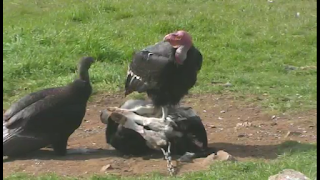 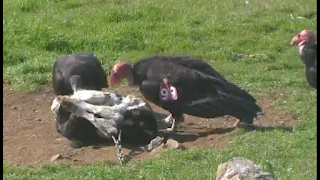 Condor #789 was born in a redwood nest deep in the Ventana Wilderness. Because of the inaccessibility and remoteness of the nest, biologists were unable to visit it to determine if the chick hatched and fledged successfully. This chick was successfully fledged with absolutely no human intervention or assistance – completely wild! The mystery chick’s true identity will not be confirmed until biologists are able to capture it and perform a blood test to determine his or her parentage and sex.  Until then keep an eye on the condor cams, you may be able to spot her or our other untagged juvenile, Condor #787!

Posted by Ventana Wildlife Society at Tuesday, February 09, 2016 No comments:

Happy Holidays from the flock!

As 2015 comes to an end, our crew has been busy keeping track of the newest members of the flock – seven young captive-raised birds that now call the hills and coastline of San Simeon home. These youngsters have been rapidly gaining flying skills and attention since we began releasing them in September. For more details, check out this article published last week in the Cambrian.

We also welcomed back several condors that had completed treatment for lead poisoning. Thanks to the skilled keepers at the Oakland and LA Zoos, they are fully recovered and have been released back into the wild. Here VWS Condor Interns Jane Sheffer and Darren Gross hold 219, aka “Puff Daddy”, as his transmitters are replaced before his release.

This holiday season, we wish you all a very Merry Christmas, and hope that you are able to celebrate condor style, by chowing down while surrounded by family and friends. .
Posted by Ventana Wildlife Society at Tuesday, December 22, 2015 No comments: